Had a great day out with Ben & John, we camped over at Great Langdale on the Friday night, John and Ben in the camper van and me in the boot of John's car, luxury! Had a good chilli, rice and chips and a couple of Old Peculiars from the ODG before retiring. The valley was looking fantastic on the drive in Friday night. 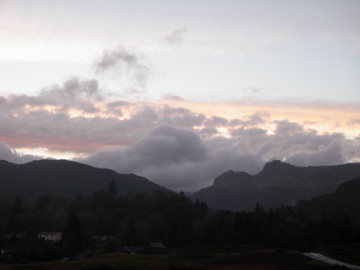 The plan was to run from Great Langdale up Rosset Ghyll, over Esk Hause and drop down to Sty Head Pass, before following the climber's traverse round Great Gable and then over Kirk Fell and from Black Sail Pass follow the traverse path to Pillar Rock. There was a memorial service scheduled for 14:00 for Dave Ridout, mentioned in a previous post, an old scouting and caving friend who died last month. The last top he had to complete in the Lake District was Pillar Rock, unfortunately he died befor he managed it. So West Lancashire Scouts Mountaineering Group were taking his ashes to the top.

So that was the loose plan run there and back. 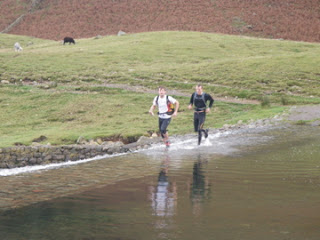 John & Ben crossing the ford at the head of Great Langdale 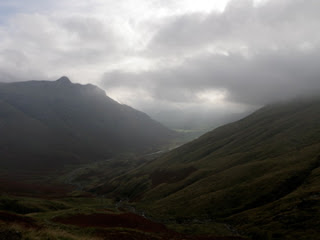 Looking back into Langdale from Esk Hause 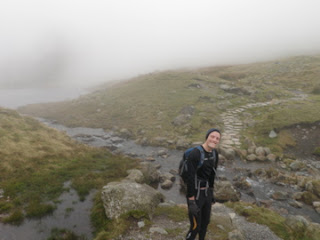 John at Angle Tarn
We were moving well and probably a bit too quick, we realised  when John announced he thought the memorial was 13:00 why we were moving so fast!  We took it a bit easier and just enjoyed the scenery as the sun started to burn the cloud off. By the time we got to Sty Head Pass it was warming up nicely and we were basked in sunshine on the climber's traverse. 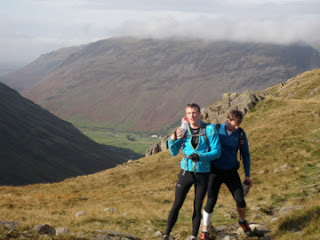 Sty Head Pass with Wasdale in the background 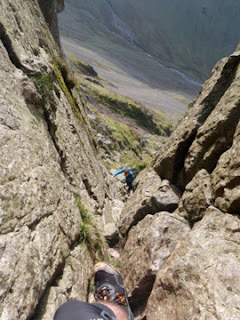 We decided as we were doing well for time to "thread the needle" the scramble up behind Napes Needle, a bit hairy in fell shoes as you can see above. 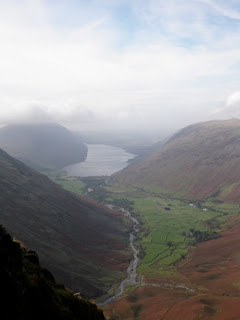 Looking down into Wasdale from Napes Needle 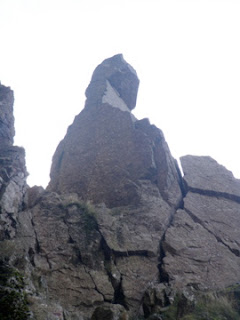 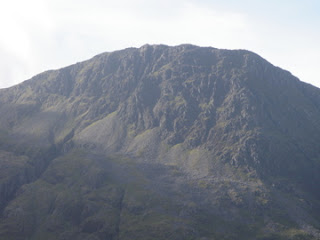 Scafell sun bathing
We had run out of water by this point so skirted round Kirk Fell to use the spring to top up our bottles, before picking up the traverse route to Pillar Rock from Black Sail Pass. We caught up the rest of the group, that had walked up from Wasdale, the memorial was thoughtful, we held a silence and a few people said some words about Dave. Then here you can see Dave being transported to the top of Pillar Rock. By this point we had started to get a bit cold as this North side of Pillar was chilly, we made our apologies and dropped down to Ennerdale. 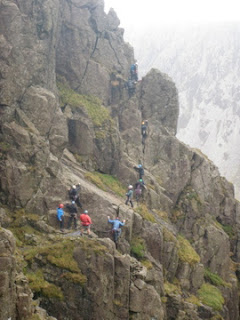 We followed the beck to Windy Gap between Great and Green Gable before dropping down to Sty Head and following the route back we had taken in the morning. I was struggling by now and not moving as quick uphill as I would like, but I'm sure that fitness will come back as I increase the time on the hills. 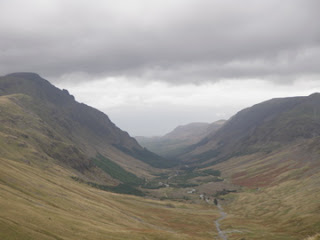 Looking back into Ennerdale
A good day out and 22 miles plus about 7500ft of climbing. After making our way back to Great Langdale we grabbed a quick pint of lime and lemonade and the stopped for fish and chips in Bowness on the way home. Excellent.
Posted by Donkarlo at 20:28