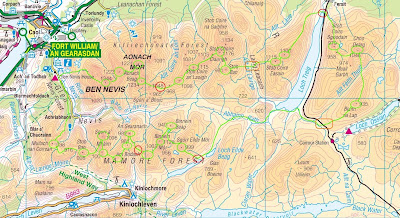 I received a request earlier in the year to support Bill Williams on his attempt at the Charlie Ramsay Round (24 Tops, 56 Miles & 28,500ft). His attempt last year, which would have seen him complete a Bob Graham, Paddy Buckley and Charlie Ramsay round within 12 months, was unfortunately thwarted by bad weather. The plan was that Bill would leave Glen Nevis Youth Hostel at midday, we would then see him for the "2nd Leg" at 20:00 at Loch Treig Dam. 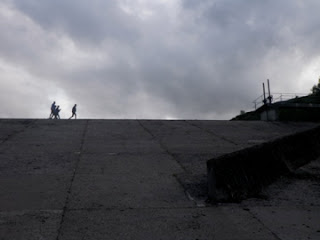 Loch Treig Dam and Support Team
Ian Cookson and I travelled up on Saturday morning to the Rucksack Club 'Craigallan' Hut near Fort William. We got here around 14:00 and enjoyed some cheese on toast, cakes and plenty of cups of tea provided by Whinn Cliff (Bowland) and Jean (Bill's Wife) till it was time to make our way to Thirsit and down to the dam. It was good to meet a couple of the Bowland guys who were providing the static support, Ian Roberts and Andy Farmer and to see Ian Charters who had arrived on Friday evening. We relaxed and conversation revolved around the usual subjects till the allotted hour arrived and it was a quick dash to sort my kit out and out of the door. 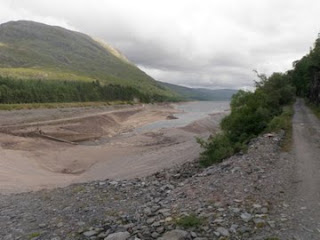 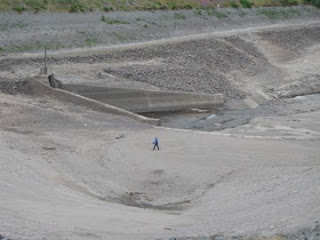 We unloaded all the kit from the cars and carried it all the ten minutes from the road to the dam, once we had set ourselves up on the dam it was time to wait and watch the horizon for Bill, Will and Carwyn to appear. It was quite shocking to see the level of the loch, the water level is usually around the white tide mark you can see on the sides. Luckily there was a pretty strong wind which kept the midges away so I didn't have to wear my mosquito net hat, fashion statement though it is! Our wait was a few minutes longer than expected but we soon saw the three figure appear in the distance and they soon joined us at the dam for feeding and watering. 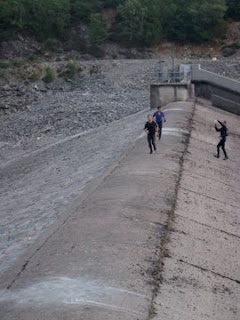 Bill, Will and Carwyn
Ian and I readied ourselves and as soon as Bill was ready we were off across the railway line and climbing Stob Coire Sgriodain, I was slightly concerned how I would cope with the climbing but obviously my strategy of eating cake all afternoon had succeeded and I felt quite energetic, and was almost setting the pace on a couple of occasions! It was about half way up the climb that the rain started and we were forced to put our waterproofs on, there was not much visibility on the tops and to be honest, not really knowing the route apart from a look at the map the week before, I just followed, occasionally handing Bill food and water as we progressed. 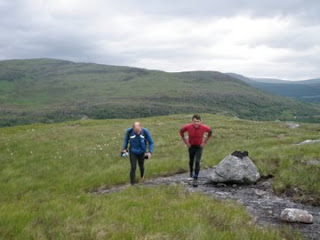 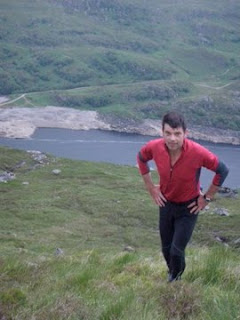 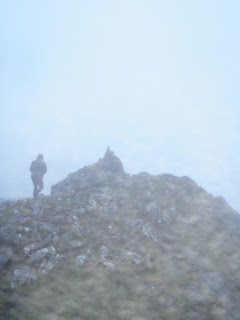 Stob Coire Sgriodain
We reached the top of Stob Coire Sgriodain and continued on to reach the summit of Chno Dearg before the long downhill to the valley bottom and onto the climb up Beinn na Lap, it is a long way after the initial steep climb to the summit, in fact we almost missed it! It is then another long downhill section followed by a long section of track/path, a river crossing and then a really leg sapping boggy section. I needed a gel to revive my legs after this and to keep up with the pace along the track and down to the next support point and the end of our leg. 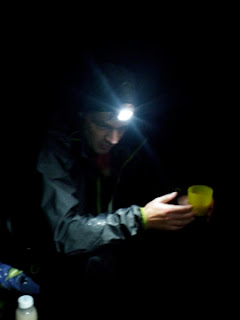 After a bit of cake, and some hot chocolate we saw Bill off with Ian Charters and Bob Wightman and then walked out with Ian and Andy for about an hour and a half back to the car park. We got back to the bunk house for just before five and after a quick bacon and egg butty and a cup of tea we crawled off for a sleep.
Unfortunately the weather deteriorated after we left Bill and he eventually had to cut the round short due to high winds. Hopefully he'll have better luck next time. A great night, although very wet, Scotland is very remote and wild and the only signs of life we saw in six hours were a couple of deer, the Ramsay Round is definitely a serious undertaking and big respect to Bill for a superb effort. 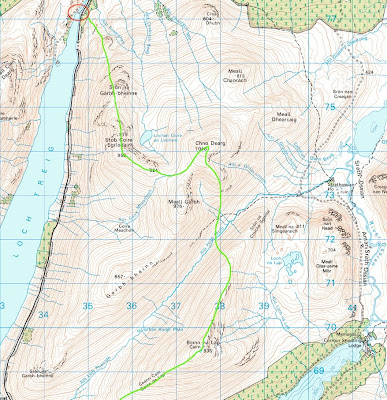 Start of the leg shown by the Green Line

2nd Half of the Leg 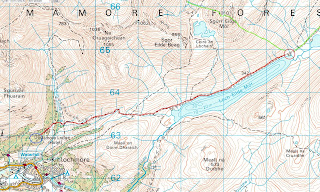