Friday night was a bit of an eye opener for me, I was looking forward to supporting Emma's BG leg 1 with some trepidation due to the lack of time I have spent on the fells in the past 6 months, and the fact I had spent the previous weekend in France eating cheese and drinking wine. I got away from home slightly later than planned but made good time up to Keswick, I did however forget that I had only had a cheese sandwich earlier that day and had forgotten to get something for dinner on the way, whoops! 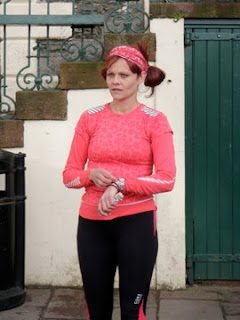 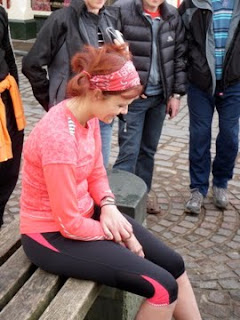 I joined Emma in the square in front of the Moot Hall as she prepared herself for the next 24hrs on the fells and let the nervous energy build up. I was carrying Emma's sack with her kit and water/food, the plan was that we would meet Yiannis at the top of Halls Fell to follow his "parachute" descent. We were a group of 4 support, Mark Smith(Swiss Toni), Mark, Dave and me.

I could tell from the start that I was going to struggle, she was setting a blistering pace and I had forgotten just how quick the BG pace is compared to my leisurely wanderings in the fells of late. I had to take a short cut below Skiddaw to Hare Crag and then join the group again, I swapped bags with Dave and skipped Great Calva and went direct across the river and up Mungrisdale Common. The group caught me at the foot of Atkinson Pike but I noticed that Mark had dropped off the back. I wasn't sure if he knew where he was going so I walked with him up the scree to the summit of Blencathra. I was now starting to regret wearing shorts as my legs were cramping due to the cold, the temperature had dropped quite a lot.

We could see the torches of Emma's party heading down the gully but I decided to stick to what I know and used Halls Fell, it was pretty greasy at the top and it was now getting quite dark. We picked our way down and after what seemed like quite a long time we made it down to Threlkeld. Emma was long gone but we still managed to grab a brew and a muffin. I also bumped into Duncan which was great to have a chat with him, and being the gentleman he is he gave me a lift back to Keswick before I drove home.

I'm pleased to say that Emma finished in 23hrs 8mins, a fantastic time and well earned. Well done Em :-)
Posted by Donkarlo at 22:50