3rd Fellsman complete and a PB! 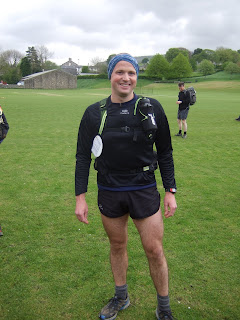 Very pleased with my result on the Fellsman, I finished in 15hrs 19mins which is 2hrs 24mins faster than my previous best and over 3hrs faster than last year.

It was an early start on Saturday, up at 3:00 for the drive to Threshfield. I arrived at 4:30, half an hour before registration opened, so I spent a bit of time sorting through kit and wandering around to waste a bit of time. I checked in and picked up my bus ticket for the 5:30 shuttle to Ingleton for the dreaded kit check ! The rules are quite precise with the compulsory kit, and it would be a real shame to get this far and be disqualified for not having 4 safety pins in your first aid kit, no danger of that though I had everything I required and was looking forward to my third Fellsman Hike.

I had bumped into an old Fellsman friend, Roger, at the school and we travelled on the bus together, he had grabbed a good spot on some comfy chairs when I came through from kit check so I joined him. We were soon joined my Ian and Pauline as we sorted through kit, discussed routes and applied essential vaseline to those delicate spots !! I also met a few guys from the forum, Stolly, Merrylegs and Britnick which was great to put faces to names, I also saw Iain Kelly and a few people who I know from previous Fellsmans including Jess Palmer and his wife. There was a great air of anticipation in the hall as 9 am drew ever closer and my bladder became ever weaker !

The 382 starters gathered on the field ready for the off as Chris Driver, the organiser, read out an email from Mark Hartell, my main competition was out this year so a chance of a win .............I wish! We were soon off running through the narrow streets of Ingleton and onto the path to Ingleborough, at this point I knew I was running too fast, I could see on my Garmin that the miles were going past too fast, I needed to take it a little easier but waited till the slope reared up before settling into a steady walk, soon I was off Ingleborough, through the Hill Inn checkpoint, flapjack in hand, and in about 10th position at the top of Whernside having averaged 12:30 a mile, I definitely needed to slow down. I passed a couple of familiar faces running back down Whernside and then to the Kingsdale checkpoint. The climbing was feeling pretty easy, even the steep climb up Gregareth passed with not much trouble, and I wondered if I could keep this pace up all the way round.

The wind was well up on to of Gregareth and it was like running into a wall getting to the checkpoint, I slowed down a little along the ridge to Great Coum to get some recovery in before the long descent to Dent via Flinter Gill, I resisted the sausage roll this year and headed off pretty quickly. After a slight detour for a wrong turn on the road (concentrating on eating too much!) I was caught up by a large group including Jim from Gateshead and Ian Kelly, we headed into some bad weather on Blea Moor and after the checkpoint retreated to the safety of the tent at Stonehouse, the rain was battering down and the wind was blowing hard so that it felt as if the rain was being blown straight through every opening in my coat. I was just eating some pasta and Jess came into the tent, I wasn't keen on going back out into the weather but he just said "you coming?" and I followed. We made good time to the top of Great Knoutberry and ram off pretty quick to get out of the wind and hail that had now started, I decided that at Redshaw I was going to put some long trousers on as my legs were cramping with the cold and it was feeling hard work. Jess set off whilst I was putting my Ronhills on and I said I would catch him up, as I headed out of the tent he was well ahead and I wasn't moving as fast as before, in fact I was starting to struggle, I couldn't eat anything as I couldn't swallow I was just chewing food then spitting it out on the floor, this was my lowest point on the whole event and it lasted till the checkpoint at Fleet Moss.

At Fleet Moss I was feeling pretty bad when I arrived, but after some warm rice pudding and some tea with an energy gel mixed in, I felt strong again and ready for the tough crossing of Fleet Moss and Middle Tongue. This part of the route is notorious and it is miles of man swallowing peat bog, I went up to my knees a couple of times but I was moving well and reeling in a group of 4 runners out in front. I thought I may get through Cray prior to grouping but I was 4 mins too late and I was teamed with Mike, Ali, Nigel & Paul, Buckden pike seemed like a breeze and the BG training was starting to show now as I felt stronger, we picked up the fast line I had reccied the other week and were soon down at Park Rash where we picked up two other runners for the ascent of Great Whernside. One of the guys who joined us at Park Rash was Ted Adamski running his 32nd Fellsman, he ran his first Fellsman at 27, the same as me so hopefully I'll still be going as well at his age. We were soon over the top of Great Whernside and down at Capplestone Gate, the route from here follows flashing beacons to Yarnbury, in the past this has seemed to go on forever but it just flew by and we were at Yarnbury and running down through Grassington before I knew it.

A shower and a bowl of chili later I was in my sleeping bag and well away chucking out the Zs I was tired but felt great, like I could have carried on and had plenty more climbing in my legs. I definitely think I went out too fast and could have paced myself better but I am very pleased with my time and it has given me great confidence for the BG.

Thanks to all the organisers and staff on the route they really do make the day enjoyable and create a great atmosphere, a great event and one I will be back for again next year with a new PB to beat !! Photos here including the one of me leading Sarah Rowell at the start !! 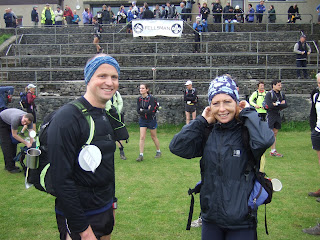