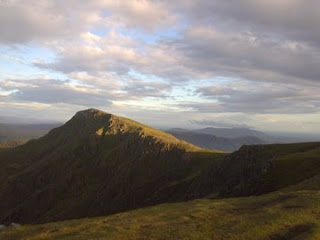 I got back last night just after midnight after a long day out on the hill finishing as the last light of the day was disappearing. I had planned originally to camp over and have another day out today, but my bed was calling.

I had been asked if I was available to support a Joss Naylor Challenge being attempted by Ed Swift of HRMI on Saturday, starting at 4am from Pooley Bridge. It was therefore an early start as I left the house at 2am on Saturday morning, en route to meet Ian Charters and John Swift at Patterdale. It wasn't the best sign for conditions on the hill as I was slowed going over Kirkstone Pass in the car, by thick fog, I had to keep my eyes open for stray sheep !!

We were away about 7 mins late as Ed was just finishing getting his stuff together but we made pretty good time despite the conditions, that deteriorated as we progressed down the ridge towards High Street. Ed, as always, was in good spirits and the conversation was light hearted and the miles soon passed, we were up on time as we reached Julie at Kirkstone in the pouring rain. A quick cup of tea and a nice slice of flap jack stoked the fire and we were underway again on the ascent to Red Screes. I was only running as far as Fairfield, and plans were to drop down off St Sunday crag. I decided due to adverse weather that it would be better to get off the tops and down to Grizedale Tarn and run out to Patterdale down the valley. I was back in the car for 11am and drove home, I did have to stop for forty winks at Forton services !!! 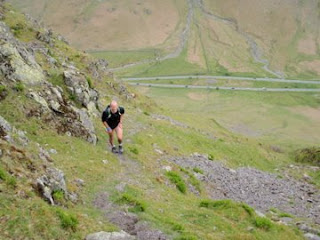 Tuesday I met Duncan at Keswick leisure centre at 9am and we drove up to Honister Pass to pick up Rhiannon before driving back to Dunmail to start the run over leg 3 to Wasdale. The day was pretty varied weather wise and we saw sunshine, followed by zero visibility, hail, snow, rain and high winds, all adding up to make an entertaining day. I followed the route from Dunmail over Steell Fell, Calf Crag and on to Sergeant Man and it felt very familiar now, almost like it is programmed into my feet ! The going was soft in places under foot but otherwise not too bad as we crossed to High Raise and continued onto the Langdale Pikes, the group of walkers on top of Harrison Stickle were suprised to hear that my end point for the day was Honister Pass.

Duncan and Rhiannon tried out the route via Stake Pass to Rossett Pike whilst I dropped down and took the ramps up to the ridge, I was taking it fairly easy but still got there abot 10 mins quicker so I think it make sense to stick with the ramps. I picked up the route up Bowfell easily, although I took a dodgy line off Rossett Pike, and we were soon at the top and into some pretty grey skies. On the way over Esk Pike to Great End it started raining, then snowing briefly, and cloud came well down and made the visiblity pretty poor. As we were on the way off Great End on the way to Ill Crag the skys then cleared and it was sunny again, three seasons in about 15mins ! suppose that's the Lakes for you. The top of Scafell Pike was quite busy, as we passed and headed down to Mickeldore and Broad Stand, it felt very greasy and after a few looks at the move we decided to skip it and use the traverse route round to pick up the Foxes Tarn path instead. The cloud was down again and the rain started, as you can see there weren't any great views from the summit of Scafell. 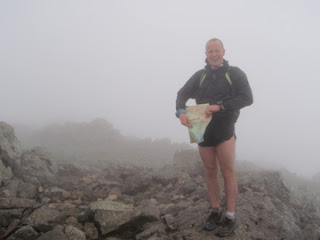 We descended to Wasdale, where Summer had arrived and the valley was bathed in sushine ! From here D&R decided that they would take a more direct route to Honister via Sty Head and I would follow the BG route and meet Duncan when he came back in the car to pick me up, Rhiannon only has a 2 seater so we couldn't all get in this. It seemed strange on my own on this part of the route as I haven't spent that much time around these peaks, an by this time it was raining again and the cloud was well down making route finding interesting but okay. By the time I got to Pillar the skys had cleared, again, and it was a beautiful evening, the setting sun casting long shadows over Wasdale and lighting up Ennerdale like a beacon. 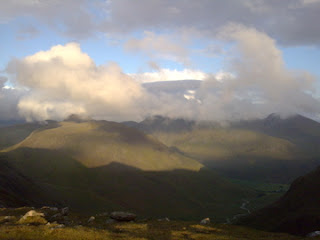 The wind was quite chilling now and I stopped for a moment at the summit shelter on Pillar to change my top and put my hat and gloves on. I decide that I would probably be better to drop down from Black Sail Pass rather than staying high on my own over Kirk Fell and Gable etc. 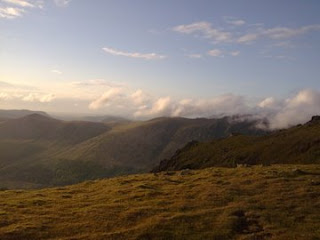 I followed the coast to coast route (as recommended by Julia Bradbury) to Honister and the last bits of daylight. I still felt to be going well which is a good sign, and left my totals so far this week at 50 miles and 18,127ft of ascent so not a bad start. I'm on nights this week at work but should get a few more miles in. 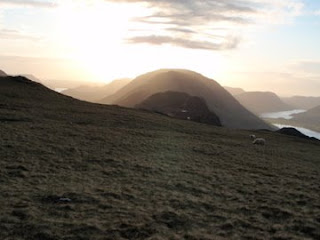