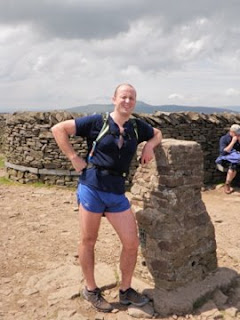 Pen-y-Ghent
Its been a few weeks since I last posted on my Blog but don't worry I haven't given up or disappeared, lost motivation or got lost just not really had the time to sit down and write down my thoughts.

I was surprised just how much the round did take out of me, I've not slept so well for years, even a couple of weeks later I could still feel some effects from my round. I did a couple of routes on the big wall at the climbing wall and was shot, the bike ride to work felt hard work but I still averaged 17-18 mph so It mustn't have been as bad as it felt!

I think supporting my Bob Graham Round has sparked some interest with Gem which has been fantastic, and as a result I now have a regular training partner on the fells. Our first excursion was to Horton in Ribblesdale and an attempt on the three peaks at a fairly leisurely pace aiming for about 6-7 hrs. We made pretty good time over Pen-y-Ghent and carried on well by Hull Pot and onto Birkwith Moor but the sky turned a very dark shade of grey and started to look very angry. We had only taken lightweight jackets with us so I decided it was probably better to turn for home down the road back to Horton cutting the run short. Sure enough half way back the heavens opened and we were well and truly drenched by the rain, straight through our shower proof jackets and soaked to the skin. Definitely a baptism of fire for Gem, which I hoped had not put her off too much. 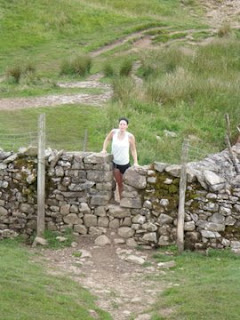 Gem on the way to Whernside 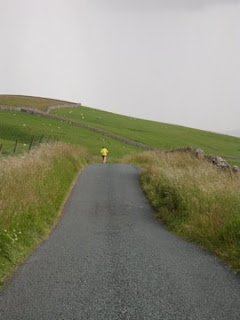 The 12th July we headed up to Honister Pass as I had planned to support Duncan Richards on his 50@50 we had a text message on the way to say he was down on schedule but still going. Unfortunately for Duncan he had to call it a day at Red Pike due to excruciating pain in his knees and make a low level traverse to Honister. He arrived about 7hrs after we expected him but it was great to see him and help him down of Grey Knotts. We did manage to get a few miles in during the day having a run out to Black Sail Pass and then running up and down looking out for Duncan. 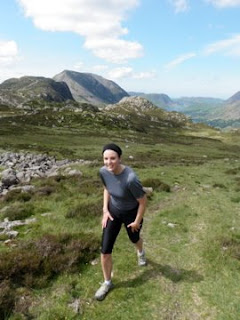 Gem heading up from Honister
The next weekend we decided to make amends and stay more local, heading off on one of my favourite training runs, although a slightly shortened version missing out Darwen Tower but taking in; Rivington Pike, Two Lads, Winter Hill and Great Hill a total of 16.5 miles and about 3,000ft of ascent so not a bad run. We walked this route last year with some folks from Gemma's work when they were training for the Caledonian Challenge so we both knew the terrain well. It was very wet around Winter Hill, due to the recent rain, which made going awkward at times especially when I slipped coming off the back of Winter Hill and got mud all up my back! It was a good day out and definitely more successful than the previous week, Gem was now starting to talk about maybe attempting the Fellsman next May!

The following weekend I volunteered, via the forum, to support Rod Jones on a sub 20hr BG on leg 2. I had run this leg pretty quick in practice for my BG but it would be a fast leg aiming for 3hrs 50 for 13.2 miles and 5900ft of ascent. I got a text from Anthony at 5:45 asking if I could bring him a bum bag as he may carry on to do leg 2 with us, I had just got up to get my stuff together. I hopped in the car and headed up to Threlkeld for about 8:00, I was talking to Rod's wife Gill and having a coffee when we spotted them on Halls Fell Ridge on schedule and moving steadily down.

They were soon down, Rod, Anthony and Stuart, who had turned up at the Moot Hall after reading the forum to offer support. We all soon set off to Clough Head and started the slog up the steep front, the last time I did this leg was on my BG in the dark and it seemed only too familiar. The pace was quick and we made great time along the ridge chatting as we ran about running, and the fells, four of us ticking off the peaks as we went, we had some strange glances from all the walkers making their way across the Helvellyn range. We sprinted (almost) up Fairfield and then over Seat Sandal and down to Dunmail Raise just three minutes down on the schedule. To cut a long story short there had been a serious accident with a cyclist and a motor bike and we arrived into a scene of ambulances, police cars and the air ambulance. Gill had witnessed the accident and delivered first aid to the cyclist whilst waiting for the emergency services to arrive so we had a bit of a wait whilst she gave a statement, it was at this point I should have sat in the shade as I came home with a lovely sun kissed glow after sitting in the midday sun for 2hrs ! Unfortunately Rod's wheels fell off on the way down Scafell and he had to drop out at Wasdale, he was going like a train so a real shame for him, better luck next time.