Mike and Ali's Bob Graham Round 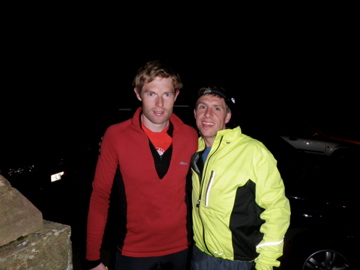 The end Ali & Mike
I was contacted through my blog by a couple of lads who I ran the last 20 miles or so of the Fellsman with this year, Alistair and Mike. I had recently been making enquiries to find out if they had managed to complete their Bob Graham Round on the 6th June, the same weekend I had originally planned mine. It transpires that they experienced unseasonal conditions on the Helvellyn ridge with snow and wind, which left them and their pacers in a near hypothermic state, resulting in them calling it a day at Dunmail.

Ali contacted me so I emailed him to see how their support was looking, when he described it as very light he wasn't joking, so far none! I volunteered for three legs, if required, from Dunmail onwards and advised them to try the FRA forum for some help. As usual the forumites rallied support together and they now had support on all the legs, ready for a 00:30 start on the 15th August.

The forecast was not brilliant, gales and rain, but it looked as though it was set to improve from lunch time onwards. I met the road support in Keswick in the morning and left my car by the B&B they were using as a base and even managed to get a brew from the owners who were very accommodating and also runners from Keswick AC so understood the whole BG thing! We headed up to Dunmail to meet them, they had set off from Threlkeld 10 mins down on a 23:30 schedule so we were pleased to see them coming down Seat Sandal 10 mins up on schedule again. After a quick water and feed it was off up Steel Fell with me in the navigator/mule/pacer role, I was determined to try and make some time up on this leg for them so they would be 30 mins up at Wasdale. We were going really well, the conditions were shocking and as the wind gusted and the rain persisted down it made the going hard work. I was worried about the rocky ground from Bowfell onwards that I knew would be slippy and it would be hard for us to maintain the pace and the increasing advantage we had. Luckily for me the guys were still going great as I had a bit of a dip on the climb up Bowfell, but soon recovered and we were making great time across the plateau towards Esk Pike and Great End. 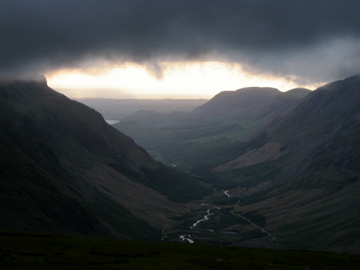 Fading light from Grey Knotts
As we reached the summit of Scafell Pike we had a 30 min advantage and the rain had eventually subsided, and there seemed to be a brightening behind the clouds. Obviously Broad Stand was not an option so we traversed under the East Face of Scafell to pick up the Foxes Tarn path, unfortunately we mistook the path for a stream and went too far, after a bit of backtracking we got onto the path and headed up to Scafell, we had lost the advantage but were still on schedule. After a quick descent we picked up the scree slope down to Brackenclose and we met up with Steve Lang who was to support leg 4 with my assistance.

I decided to take an extended rest at Wasdale as I was feeling pretty drained after pushing it on the last leg, I would have something to eat and change my socks etc and meet up with the guys again at Black Sail Pass. After a quick drink with Anna and John I headed off up the path to the pass, I got there half an hour before they were due so I ducked down out of the wind and admired the scenery for a while. I could soon see Mike's bright yellow jacket making its way down pillar so I gathered my stuff together and joined them on the slog up Kirk Fell. It felt good to see them again and get back into the rhythm ticking the peaks off, we were soon over Great Gable, Green Gable, Brandreth and Grey Knotts and I was picking up the line down to Honister, as we looked left the sun, low in the sky, was reflecting off Buttermere and Crummock Water it looked as though the last leg was going to provide some good conditions. 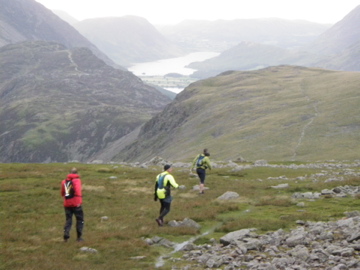 Descending to Honister
After a quick feed and water stop at Honister all that was left was three more peaks, by the time we reached the summit of Dalehead our head torches were on as we jogged across to Hindscarth and then onto Robinson. The pace was quick and I was working hard to stick with them, we made steady progress down the Robinson Ridge the dark making it quite awkward and difficult to move at any speed. We soon hit the grassy col and we descended into Newlands and along the road to dump the bags and for Mike and Ali to change into road shoes. The pace back into Keswick was blistering for two fellas who had just run 60 odd miles and not bad for one who had done nearly 40, it was decided that, although it was a tenuous achievement, if we got back for midnight then they would have finished inside a calendar day. We went for it sprinting down the road and onto the High Street, the drunken revellers passing comment that it was too late to be running, they touched the Moot Hall at 23:59 twenty three hours and thirty three minutes since they set off.

I recognised the bemused grins on their faces, that feeling of utter exhaustion and a disbelief that, yes you have done it, you complete the Bob Graham Round. Good effort lads you deserved it, and it didn't come easy, it was certainly earned. 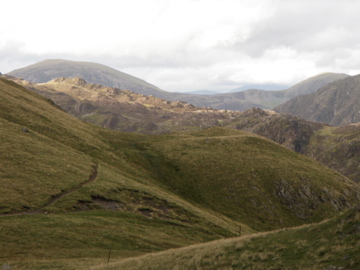 From Black Sail Pass looking towards the end 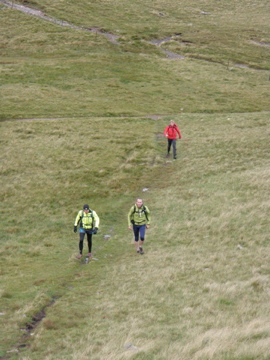 Coming off Pillar to Black Sail 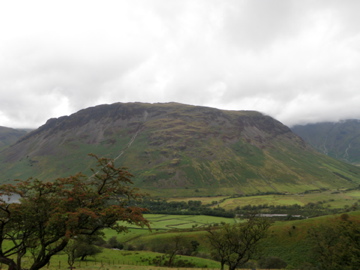 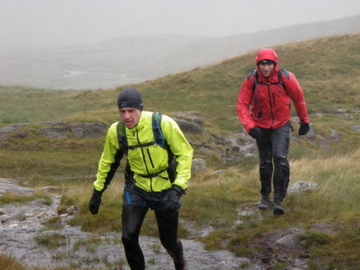