On the 21st Nov Ali Mac and I did the Yorkshire Three Peaks run. I had promised Ali that I would take him round the route in the summer but we never got round to doing it. So, as a final blast before 2008 was out and I flew off to Cuba we picked a free Friday and headed up to Horton in Ribblesdale. We made a couple of drops to stash some water at the Hill Inn and at Ribblehead on the way up, we then parked up, filled up the bags with Jelly Babies and sausage rolls and went to clock in at the Pen-Y-Ghent cafe . Couldn't believe it when we got there and the cafe was closed, probably not their most popular time of year !! 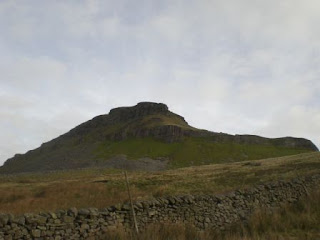 Pen-Y-Ghent
It was looking like a great day, the sun was out and a chill in the air, perfect conditions for a nice day out. We were steady up Pen-Y-Ghent and were soon up to the short scramble to the summit. It was here that we noticed the impending dark clouds heading in our direction looking like they might be carrying some snow. The clouds were further away than they look on the photo 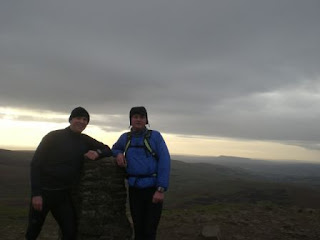 Ali Mac & Me on the summit Pen-Y-Ghent (No.1)
We chucked down a handful of Jelly Babies and a bit of flapjack and then headed down in the direction of Hull Pot Beck and Ribblehead. This area I know from experience is usually pretty wet and resembles a big sponge, the big field at the 2008 three peaks race had obviously impacted a fair bit on the route, with it being flagged, as the route was obvious all the way across here. Considering the amount of rain we had during the summer it was pretty dry really and we managed to get across mostly unscathed. The temperature dropped considerably on the way across and we did get a flurry of snow which added to the fun (does this make it a winter round ?)
We decided to have a quick bite to eat after the road section at Ribblehead and ducked into Batty Wife Cave to get out of the snow. 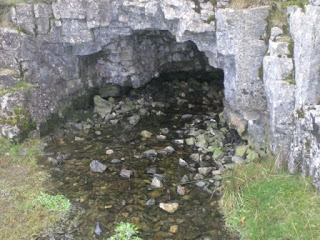 Batty Wife Cave
After some strange looks from some passing walkers we topped up the water bladders and chucked in some nuun tablets , which I now swear by for long distance running hydration. Due to the race route being over private land and the walkers route going the long way round we decided to use the alternative footpath up the steep front of Whernside. I haven't used this path before but apart from it being incredibly steep up the last climb to the summit its pretty good and direct. 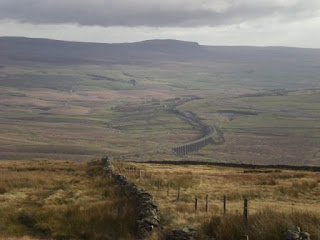 Looking down from the climb up Whernside to the Ribblehead Viaduct
We arrived on the summit ridge feeling like we'd done a bit but had to look fresh because there were two walkers sat having lunch at the summit. This was pretty handy as we didn't need to use the self timer ! 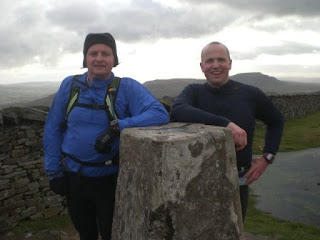 The summit of Whernside(2) The biggest one in the bag
(Think Ali was feeling the cold more than me !)
We descended the path to Chapel-Le-Dale and picked up our second water cache from the Hill Inn before we hot footed across the limestone pavements to the final climb up the steep steps to the summit plateau of Ingleborough. The wind had got up quite a bit by now and it had got pretty cold so we didn't hang around too long on the top, just long enough to have a chat to three lads who were also doing the three peaks, but over three days. Notice that we had wrapped up a bit more by this point (Ali two hats !) 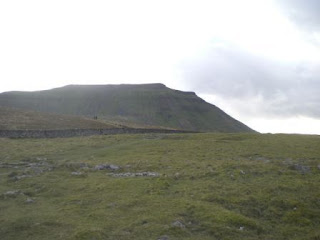 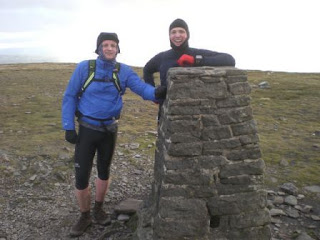 Summit of Ingleborough(3) All downhill from here
All that was left now was the run back to Horton in Ribblesdale, mostly downhill on a rocky path with a few puddles to hurdle. We were soon at the railway crossing and heading back to the car over the river. We had got round in just over five and a half hours at a steady pace, a very enjoyable day. I decided we had earnt a cup of tea and a chip butty at Inglesport. I haven't entered the 2009 race but have my sights set on the 2010 race to try and break 4 hours. Maybe !
Posted by Donkarlo at 15:53