Flexi Afternoon in the Trough 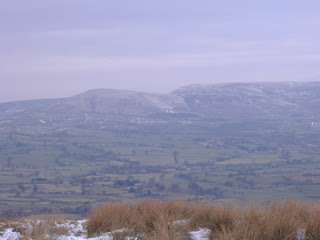 After the adventure on Seat Sandal on Sunday we got home safely through the road works that seem to have been permanently in place on the M6 for about the last ten years !
Monday dawned snowy and cold so I decided against the bike, a decision I made a few times this week, the roads weren't actually that bad but I know how easy it is to slip on the skinny tyres and I didn't fancy any tarmac rashes this week.

I ran at lunch with Ali round our Balderstone run from work in a much more respectable time than I have been managing recently, and again on Tuesday in reverse. A meeting at work held me up from getting to the track but I will get there soon. According to Ian's Blog it sounds like a good session, I also like the 300m. I decided given the recent weather that the Bowland Fells were looking pretty nice and snow covered, and it doesn't happen that often so I booked Thursday afternoon off work. Climbed okay at west view with Gem & Rick on Tuesday night.

Thursday was one of those days that are few and far between, I had the fells completely to myself and they were fantastic. There wasn't loads of snow but what there was gave a winter coat to the fells. I parked at Fell Foot and headed off up Parlick into the crisp winter's afternoon, the air temperature was cold but there was hardly a breath of wind, perfect. 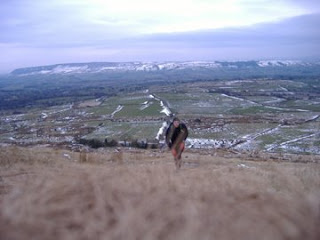 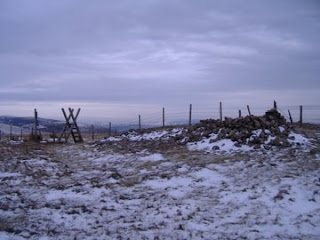 Top of Parlick
Following the ridge up to Fairsnape Fell there were wonderful views over to Pendle Hill, also shrouded in a winter coat of snow, and the south Lake District fells. I took the opportunity on the summit to take a few photos and enjoy the atmosphere. 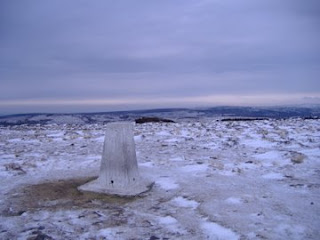 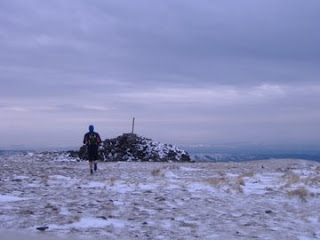 The benefits of the cold weather were great, the peat bogs across to Holme House Fell were well frozen so apart from the odd cracking sounds as I was crossing them they were pretty dry and my feet remained pretty dry and toasty. In places where the snow had drifted it was entertainig climbing up the fresh snow onto the peat hags. 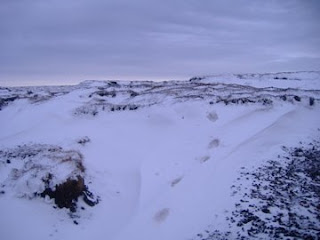 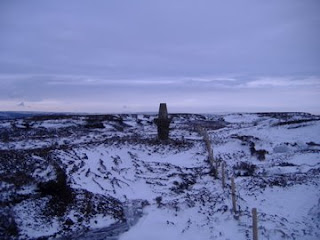 This is a hill I've never visited before and it is a strange place, obviously when the trig point was set on its foundations the ground was a lot higher than it is now, over the years the weather has done its worst and left an unusual sight at the summit, probably the only Bowland summit that involves climbing to get to the top ! 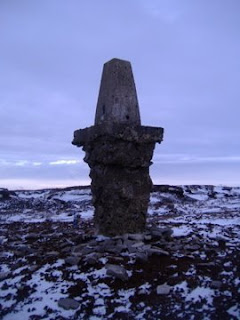 That's what I call erosion !

I turned back from here and headed back to Holme House Fell via the head of Langden Brook, it was starting to feel quite surreal, the sky had turned a grey pink and a dim light was cast over the fells as I skirted round Fairsnape and dropped off the steep descent of Parlick and back to the car, not before I scared the life out of a walker as I leapt past them on the Parlick descent ! 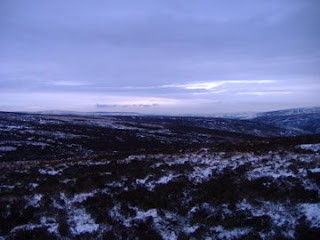 The Trough in all its Winter glory

Really glad I took advantage of the snow and had the afternoon, and the fells to myself. I finished off today with 4.5 miles at lunch time near work.

I have a walk planned with the scouts on Sunday morning round Croston for a few hours in training for the Bowlander hike then I think Gem and I are going out in the afternoon. Hopefully I might be able to get out on the bike next week before a Friday in the lakes on a recce of leg 1 or 2.
Posted by Donkarlo at 16:56