Leg 1 And a Big Blue Sky

Weekly Totals - 49.1 Miles (9.1 walked), 8268ft of Ascent in 09:43:26
A return to beautiful sunshine at the end of the week for a run round leg 1 on Friday with Ali & Toby(Ali's Dog). We made an early start and met up across the road from work making our way up in Ali's car to Keswick, it was very foggy all the way up and I was slightly concerned that we were not going to get any great views, but this was not to be the case. 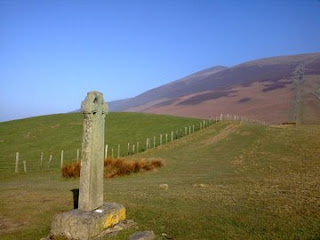 We didn't make the best start as I wasn't sure where to pick up the footpath to the bridge over the river Greta in Keswick, so we wasted about ten minutes checking notes and maps but we were soon on the way, I will know for next time !! I discovered on the way up Latrigg that I was developing a bit of a wet hip, my bladder had punctured at some point (that's my water bladder in my rucksack!) and was leaking down my leg, a quick but of patching up with a plaster and we were soon on the way again, not a good start so far. 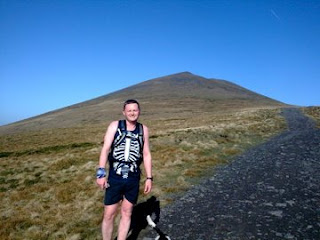 Ali had done the Skiddaw race last year so was more than familiar with the route to the summit, not that it is hard to miss! We climbed out of the fog in the valley and started catching up the walkers who had made an early start from the car park at Latrigg, and we were soon on the summit of Skiddaw, it was really warm and I was down to just my shorts as even my t-shirt seemed to be too hot. We had made good progress and were well within schedule time. 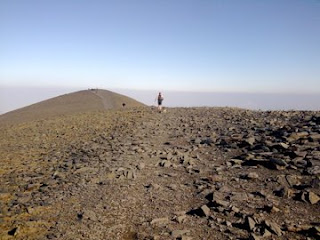 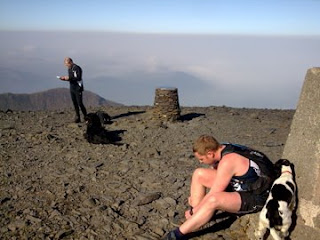 I made a slight error on the way down though and missed the fence crossing to Hare Crag and crossed lower down, I realised my error but we continued down to the Skiddaw House track and back tracked to pick up the path to Great Calva. We stopped for a quick bite to eat at the top of Great Calva, Toby ate about half of Ali's food as well as his biscuits, we had a quick chat to a runner out for a long day, and then headed down to the River Caldew. 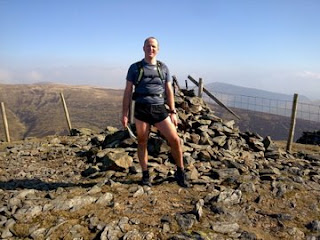 I tried the route following the fence, but the heather was really high in places, and was hard going, it was very dry and you could feel it scratching your legs as you tried to run through it, we both ended up in the river Caldew looking like Freddy Kruger had tried to rugby tackle us, I am going to have to figure out a better way down here, I could see quite a few lines of trods coming off the top as I looked back, just none in the direction we went! Poor Toby had to be carried part of the way, the heather was a least twice or three times the height of the average spaniel and he's only a little lad, it was quite funny though watching him bounce through the heather! 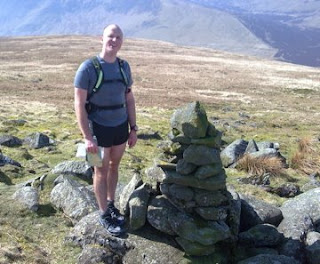 We carried on up over Mungrisdale common and onto the last climb of the day, the summit ridge of Blencathra, from here all that was left was to head down Halls Fell to Threlkeld, it was very dry and we made good time dropping down the ridge, although when I come back I want four legs, Toby was making it look far too easy and did scare us a little as he is very inquisitive looking over edges! 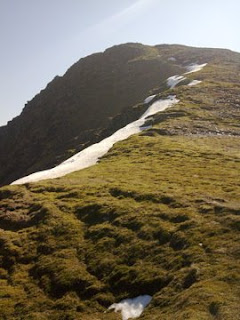 We followed the old railway line back to Keswick, a really pleasant path I discovered last year when Gem and I were camping at Dale Bottom. 18 miles and just over 5800' of ascent in 4hrs 25mins not too bad, we even managed a couple of 8:30 miles on the way back to Keswick.
The rest of the week has just been the usual lunch time running, walking in the evening with Gem round Croston, taking advantage of the clocks changing, and as mentioned in my previous post, the Liver Hill race Tuesday might instead of the track session. My legs felt quite tired at the beginning of Friday's run but towards the end I felt pretty strong. I think I'll be out for about 20miles on Sunday morning, and then cycling and running through the week, not sure about my plans for next Friday.

I tried out my new shoes on Friday as well, I have bought them, mainly to replace my Montrail Highlanders which were fantastic shoes but the uppers have seen better days, they are not bad for short training runs, but I needed something for the Fellsman. I have invested in some Adidas Kanadia TR shoes and found them to be great, good grip, comfortable and secure. I will be giving them the ultimate testing on the Fellsman but up to now I am very pleased with them.
Posted by Donkarlo at 20:24