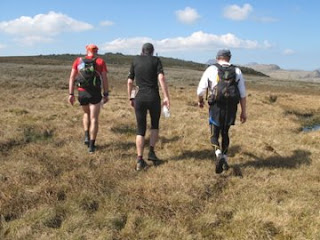 I have had a really good consolidation week that has proved to me that my training is starting to work, the weekly totals for this week were mostly completed over two long runs so I am pleased that my fitness is starting to show.

I mentioned last week that I had supported Ian Charters' JNC on Saturday, there is a detailed report of the legs on Ian's Blog with some photos. I had an early start on Saturday getting up and on the road at 3am to make sure I made it Pooley Bridge to start at 5am. I was about half an hour early which gave me chance to sort out my kit for the day, and prepare myself for what was going to be a long day. I had planned to run a couple of legs from Dunmail Raise to Greendale Bridge with Ian ,but due to a couple of people dropping out in the week, he was short of support on leg 1. So I planned to run from Pooley Bridge to Sty Head Tarn, round about 35 miles and 12,000 ft of ascent so a good days training all round. 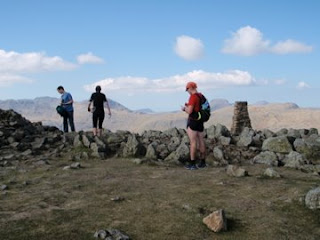 Leaving High Raise
We set off in the dark but didn't really need our torches for long as the clear morning soon brightened and we could see clearly. Gary, Ian and myself met Iain on top of Arthurs Pike and we set off along the ridge on our way along the summits leading to High Street and then to Thornthwaite Beacon and on to Stony Cove Pike and Pike How before dropping to Kirkstone Pass and the first road crossing. It was really cold and we didn't hang around for long, the first leg had been quite quick as the schedule was fairly tight but it felt good and I was moving well.

After picking up Phil and Dave at Kirkstone we started the slog up Red Screes before crossing Hart Crag and then to Fairfield, from the summit we could see for miles with the clear sunny day. From here the terrain was pretty familiar down from Fairfield and over Seat Sandal then to Dumail Raise and the second road crossing. I changed into shorts and changed my shoes for the next leg to Wasdale and teamed up with Duncan Richards and Rhiannon.

The pull up Steel Fell doesn't get much easier but we were soon at the top and on our way, we were all suffering climbing up onto High Raise as we were out of the breeze and I felt pretty grim for a while. By the time we got to Rossett Pike, after crossing Stake Pass, I was feeling okay again and ran well all the way to Sty Head(where I met Joss Naylor!!) and then down to Wasdale Head. 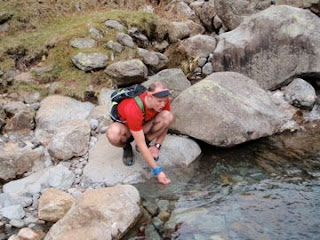 Quick Drink at Wasdale Head
I was still feeling a bit stiff on Monday but a quick run at lunch time loosened me up a bit, by the time I had cycled into work on Tuesday morning I was feeling alright again. Got a puncture on the way in on Tuesday and managed to snap my pump so not the best day.

Friday I met up with Duncan Richards again at Dunmail Raise, and Bill, who I had seen briefly on Saturday at Sty Head, we drove to Threlkeld to pick up Helen, who was also joining us, before driving to Keswick. It was warm as we set off but as we gained height there was a strong wind that was battering us about a bit, we took the right line off Skiddaw and down over Hare Crag before climbing Great Calva, Bill showed me an excellent line off here, much better than the line I had used the other week and pretty simple to follow. After crossing the river we headed directly over Mungrisdale Common and the under the scree on Atkinson Pike and to the summit of Blencathra, a slightly different line than I have previously used but I think one I will use in the future. From the summit Bill showed me Yiannis' descent route, quite steep in places and rocky but I think it would be a good alternative should Halls Fell be wet, although I want to try Doddick as well. 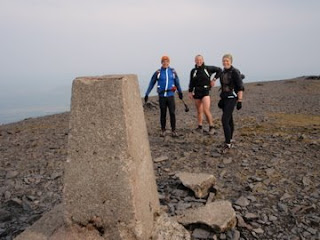 Skiddaw
Bill and Helen where heading back to Keswick from here but Duncan and I had planned to do two legs today. I was moving pretty well so Duncan decided he would move a bit slower behind me and maybe miss out Fairfield and Seat Sandal. The wind made it hard work along the ridge but apart from that it was a beautiful day and the sun came out very bright, if not a little hazy. I was a bit tight for time so I skipped Fairfield and headed straight over Seat Sandal ( I had already done it once this week!) 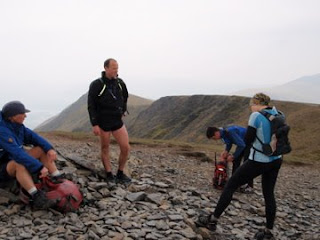 Great Calva
Another 25 miles in the bag and I felt great, should have some photos as well to add to the blog. Next week I am planning a recce of leg 5 or maybe 4 with some runs and bike rides during the week to keep the mileage up. Only a couple of weeks to the Fellsman now and I am feeling quite confident that I should beat my previous times on this event.
Posted by Donkarlo at 22:03