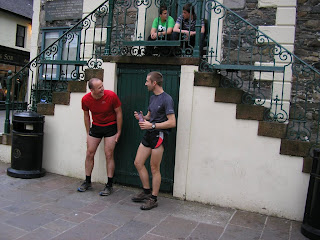 Iain Kelly and Me at the Moot Hall
We set off well, just keeping back from Iain Kelly’s team, I was trying to leave a bit of a gap between us as I certainly didn’t want to be racing round. The night air was warm and humid and as the noise of the evening cricket match disappeared below us the conversation was light and full of tales of Bob Graham rounds, fell races, old heroes of the fells and Albert and Colin’s humour which kept it entertaining.

I then heard the sounds of what appeared to be a bag piper, no surely not, as we got closer the others agreed with me, and as we got to the car park at Latrigg we could see a lone piper at the top of the hill. This was totally unexpected but very surreal and certainly added to the atmosphere. 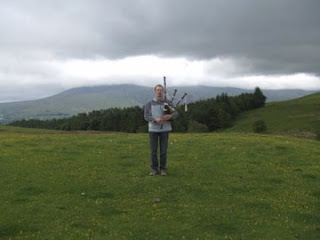 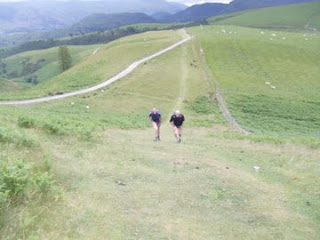 It’s hard to hold back whilst climbing Skiddaw, you have all that training in your legs, you haven’t done much for two or three weeks and it’s a long steady drag its easy to get carried away with the moment. We paced it well though, Colin reminding me every so often we were doing fine. 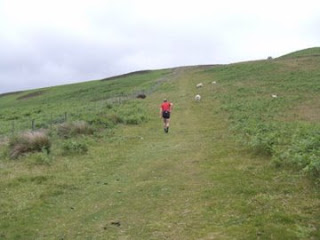 We were soon enveloped by low cloud, a theme that was to continue as far as Dunmail Raise. After touching my first of 42 summit cairns we were running again, down to the three fence posts close together, over the fence keep left, pick up the trod, it all seemed so fresh in my mind from the day I did it with Bill a month or so earlier. Then we noticed some runners to the left, it was Iain with his pacers, we must have picked a faster line or something not quite sure how we did that. We were down at the Cumbria Way track in great time and Ken Maynard was waiting with some water and jelly babies which he gladly shared, cheers. We took a couple of minutes whilst my pacers regrouped, just to let Iain get ahead again, before we started our ascent up Great Calva.

I was feeling pretty good and the climb passed without any trouble, we were soon hurtling down by the fence and to the river crossing, I spotted two rocks high out of the water and even managed to make a dry crossing, bonus. As we climbed up Mungrisdale common we were soon in the cloud again, Colin picked a great line, and without ever looking at a map, we walked straight up to the summit. He admitted to be on the way down Halls Fell that he had forgotten to put his map in his bag and was working off memory! We got to the top of Halls Fell in the last light of the day, as I had hoped, and made good time down to Threlkeld.

Jesse met us on the path to say the support was further up the lane than we were expecting, a mistake on my part whoops! Gem was exactly where I had told her, at the end of the lane next to the kennels, sorry I meant the wood yard! I got sat down and had my soup, bread and banana and black tea and honey, just as I had ordered. I knew then that the road support had it sorted and I had nothing left to worry about but to put one foot in front of the other. Pete and Jesse were here but no Dave, his wife had broke her leg so he was busy elsewhere, but we were about 15mins up and on our way again, torches in hand as the last light of the day was well and truly disappearing……………………………. 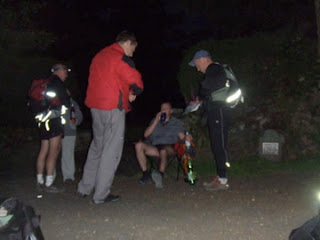 At Threlkeld, Jess & Pete ready to go, Rick waiting on 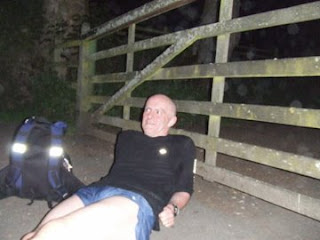