Unfortunately we did not see a spectacular sun set over the ridge as I had hoped, the cloud was not lifting and definitely looked set to hang around for a bit. As we approached Clough Head I started thinking of the day I had linked together leg 1 & 2 with Duncan. I had decided to recce the route straight up the front, rather than going up the coach road and climbing the ridge. I felt good then and felt pretty good on my round. I did have a thought on the day out with Duncan that it might be a bit much to go straight up on my round. I tried to convey these feelings to Jesse but I think he misunderstood me or chose to ignore my concerns as we were soon heading up by the gully, straight up the front. By now we had our head torches on and we could see Iain’s team fast approaching behind (I had passed Iain on the descent of Great Calva), Pete was struggling slightly with half a lung and one kidney problems so we took a minute and let Iain’s team through. We walked alongside them for a while, discussing the Fellsman and other runs earlier in the year, before we stopped for a minute to let Pete catch up.

It was clear that tonight was not going to be straight forward as the cloud was so thick on the tops that your torch light just reflected straight back in your face, it was still mild and I felt quite warm in my long sleeved top. We were soon running with torches in hand, rather than on our heads, as this diminished the glare slightly, although it was hard to gain much speed as the visibility was still poor. We arrived at the summit of Great Dodd and this was where the trouble really started. We bumped into Iain’s group again, we were all disorientated and confused in the conditions and it took us quite a while and a re visit to the summit to get on the way again. It quickly felt wrong though, too steep with rising ground to the left. I am not an advocate of GPS but Pete had switched his on, and on this occasion I was prepared to trust it, we ran off on a line and eventually reached the summit of Watsons Dodd, again the ground felt familiar.

I was back in my comfort zone again as we jogged along the ridge, although I was aware that we were not moving quickly enough, and were losing time on every peak against the schedule. The Great Dodd debacle had cost me at least 20 minutes but most of that was my advantage from leg 1 so I didn’t feel too bad. I decided that at the rate we were going we would only be about half an hour down by Dunmail. I felt content with this as the reason I had decided on a 22 hour schedule was to allow for any such incidents having said that it's still not great to feel minutes slipping away from you.

Nethermost Pike and Dollywagon Pike are awkward summits to find in the best of conditions and those on the night of my attempt certainly were of no assistance but with some micro nav we picked them up. The descent to Grisedale Tarn I have done so many times in training and usually fly down skipping over the rocks but in the dark and cloud I was stumbling and slipping and felt like Bambi! I got down to the Tarn outflow and onto the path to the col; we dumped the bags and started climbing Fairfield. I could see Iain’s team’s lights high up on the ridge and we passed them on their way down as we were about to hit the top. This gave me a boost as I realised we hadn’t dropped too much time or at least Iain had had similar troubles. We agreed on the summit cairn and then turned to run back to the ridge. It instantly didn’t seem right, too steep, the path was too windy, oh s**t! We then got very confused, traversed, still not right, the other way not right, panic, panic and more panic. Eventually we just looked at the compass and headed west! I hit a scree chute and said right if we drop down this we should hit the tarn, we had lost loads of time and I was feeling pretty low.

We hit the path by the tarn again, I grabbed my bag, head down, just get up Seat Sandal I told myself all is not lost. I was probably pretty quiet on this section although I don’t remember so much about it. I thought back to the text that Duncan had sent me just before I started “enjoy every peak” these words seemed to offer some comfort and I remembered why I was doing this. It wasn’t about proving anything to anyone but myself. I could still get round in 23 hours, I could maybe even make some time up, just stick with it. As I dropped off Seat Sandal a welcome sight, Rick's torch flashing up in my direction, I just wanted something to eat, a hot drink and to get going again. I still felt strong physically and after my discussions with myself my mental strength had returned. The sun was starting to show itself and the early morning light and heat gave me the boost I was hoping for. 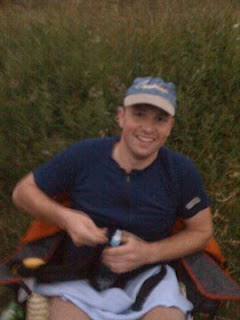 At Dunmail Raise after getting my head together
Bill and Simon were both waiting for me, Pete decided he would peel off and head home and Jesse said he would see me later on leg 5, no problems, the rice pudding was divine, and my tea like nectar. I think Rick and Gem were worried about me, Rick was about to give me a good talking too but I was good, I had sorted my own head out. Within minutes I was ready to go with a fresh and strong support team, Bill out in front setting a strong pace for leg 3……...
Posted by Donkarlo at 22:14