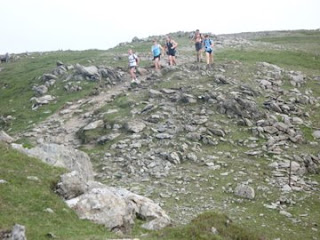 As we left Honister I knew it wouldn't be long till I saw Gem and Rick again, they were going to meet us at Newlands Church with road shoes for the last road section into Keswick. I was joined by Gerry Dewhurst & Steve Foster, as well as Emma who carried on from the last leg, Simon, who had been for lunch with Gem and Rick and was now raring to go again, and Jess who had got some kip in his bright pink tent at Dunmail then come to meet me for the last leg. It was great going up Dalehead, a fantastic feeling that all these people had come out to see me home I struggled to chew a Clif bar whilst climbing and only ended up eating half, it was too much effort to chew ! 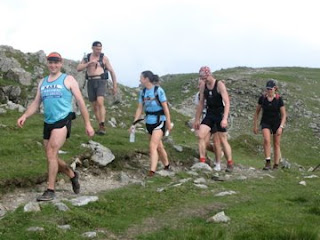 Me and my leg 5 support crew
Water and encouragement was passed from every direction each time I looked up, it was seriousy hot now in the afternoon sun and the miles were starting to show in my face I think. Coversation was light and humerous and a grin appeared across my face, this is the enjoyment of days like these, the atmosphere and comraderie shown by fellow fell runners. Two of these people I hadn't met before today, and yet they had driven all the way to the Lakes, at unsociable hours of the day, to help see me round my Bob Graham Round. It is truly humbling all the people that helped me and I will be forever grateful and would be pleased to return the favour any time. On the way to Hindscarth

A couple of familiar faces appeared as we were descending Dalehead, Ian and Paline Charters, they have been a great source of information and support during the run up to my attempt and it was great to see them on the hill and run with them for a while, chatting as we shuffled along (it was definitely a a shuffle by now!). As we climbed Hindscarth and on to Robinson, more water was passed my way everywhere I looked, I remembered I had put a bag of Haribo in for this leg. Jess found them in his bag and I took a big handful, about half the bag, they tasted great and the only thing I could really be bothered eating by this point. Gerry tipped some left over water down my back, that was really refreshing.

As I touched peak number 42 it felt wonderful, all that training, the pain, the great days out, the not so great days out and everything I had worried about was lifted from my shoulders, it was done. Not yet though there was still the slight issue of getting to the Moot Hall ! the last descent felt great, stretching out my legs down the grassy slope, laughing at Jess who was struggling in his road shoes to get the required traction. All that was left now was 10k on the road, I wasn't going to set any records! We met Gem on the road and she ran for while with us, Rick was waiting with water in the cool box, and my road shoes, after a quick change we were away. I knew I had more than enough time for this section and I took it steady, taking the time to enjoy this moment, I don't think I wanted the Moot Hall to come too soon I just wanted to enjoy this feeling, a great day with friends in a beautiful place. 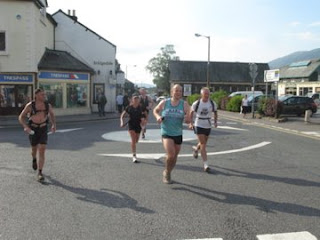 Nearly there
As we got nearer the smile got bigger and the legs strangely felt stronger, we crossed the bouncy bridge and then turned the corner onto the High Street, I could see the Moot Hall again for the first time in nearly 23 hrs. Gerry and Steve ran ahead to stop the traffic as people wound down their windows to enquire on whether it was a BG and offer their congratulations, I broke out into a sprint finish weaving my way through shoppers by the market, only to find the door blocked by a great big bloody van and some boxes! I was about to hurdle the boxes when the sensible voice in the back of my head said no, and I stepped gently through them to touch the door, YES! 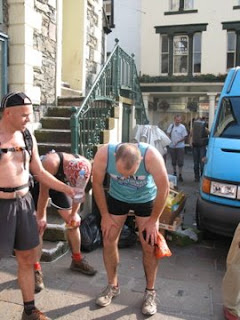 Mine and Simon's sycronised dancing!
But where was Gem and Rick ? Everyone was shaking my hand and random strangers offered congratulations. Gem & Rick appeared over the steps, they weren't sure which side of the market stalls I would come up and hadn't seen me come in, Gem gave me a massive hug, her and Rick had played a blinder on the road support it was flawless, she told me she was really proud of me but I was really proud of her too. They had brought some bubbly with them and after a couple of swigs out of the bottle I passed it round. Jude from Gemma's work had turned up to see me in, and she commented that I looked to fresh, I certainly didn't feel it! As everyone dispersed and said their goodbyes we headed down to the car, we all sat round for a bit eating flap jack, making phone calls and just trying to take it all in whilst we reorganised the car and bagged all the smelly stuff. 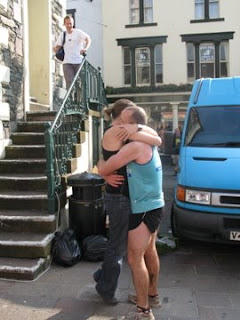 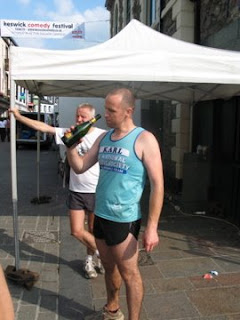 My walk had become quite comical now and I wouldn't have looked out of place in a Monty Python sketch! Of course the room in the Hotel was on the second floor! We had a shower then headed down for some dinner and some more bubbly. Duncan Richards popped in to say hello, it was great to see him, I have spent a lot of time training with him. We were all starting to show signs of fatigue, converstaion had turned to grunts and we decided it was time for bed.................. 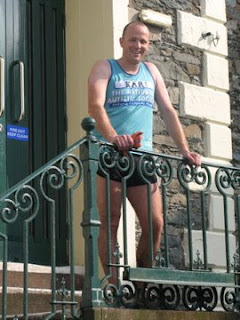 Thank you to all of you who helped me get here, to all those who've dragged me out on training runs, asked me to support various challenges, those who turned up on the day to drag me round, I can't thank you enough. Huge thanks to my road side team, Rick & Gem, a pleasure to see you both and you looked after me amazingly. Especially Gem for being so understanding when I kept dissapearing at 3 in the morning and leaving you for the day, for not getting fed up with me talking about the Bob Graham all the time and for your support. Thank you all.
Posted by Donkarlo at 12:06