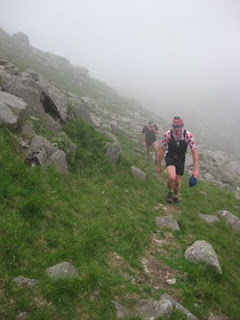 Simon and me through the mist

We made good time up Steel Fell, only just over the schedule time, I have always used the direct route straight up the gully when climbing Steel Fell, although whilst talking to Joss Naylor (notice the name drop!) at Wasdale on Ian Charters’ 55@55 he mentioned going diagonally on a rising traverse and going up a gully just near the top. This was the line we took and it seemed a much nicer gradient and easier than normal, Bill was spot on as usual with his route finding and we skipped across the top and onto Calf Crag no problem. The cloud was now starting to burn off and rise making a nice morning, as the heat started to penetrate and warm my body.

Simon gave me a piece of fruitcake and some honey roasted nuts on the way to Sergeant Man, these made a nice change to the food I had been having and gave me a little boost. I was fairly focused on this leg and pretty much kept my head down and followed Bill and Simon, who kept talking to me and encouraging me along. I wasn’t the best conversationalist at this point but just listening to them gave me something to think about. I was just off the schedule times on the earlier peaks but didn’t lose much time. I suppose this was the first time I had really started to feel a bit of a hard spot, up the back of Rossett Pike and onto Bowfell it felt hard. As I got to the top of Bowfell though Bill told me that I had made about 4 mins on the ascent, I said “good because it felt like I was trying!” 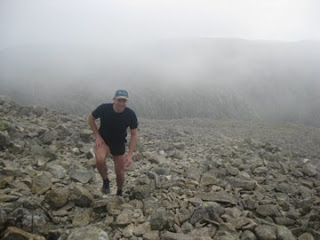 Approaching the summit of Scafell Pike 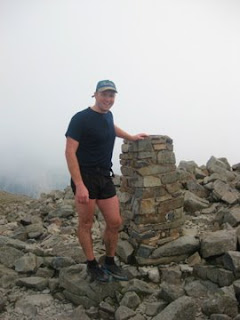 The highest point on my BG, Scafell Pike

This was just the news I needed and it spurred me on, over Esk Pike and Great End I gained more time and then after we had ticked Ill Crag and Broad Crag I made up a bit of time climbing Scafell Pike. This was the first time I can remember seeing other people, loads of three peakers and a couple of rangers. To my relief I could see Steve on Broad Stand with the ropes in place, I gave him a wave and he shouted “Karl?”, “yes hello Steve” I shouted. I got to the bottom and I was offered a belay but I said I would be okay with the hand line. I was soon up and over the difficulties and could hardly believe how quick it was, I was now on the scramble to the top with Bill close by, we made the top 7 mins quicker than the schedule. 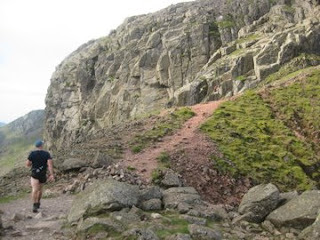 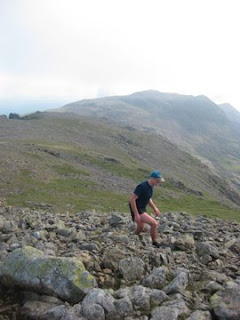 Nearing the top of Scafell
I had turned round as I reached Broad Stand to look for Simon, I hadn’t heard from him for a bit, but he was nowhere to be seen. He had stopped to put something in his bag but we had gone from sight, I felt bad but we couldn't wait I had to get down to Wasdale. We ran down the path then picked up the trod to the crags and straight down the scree, we were flying and I felt great, we had made up nearly half an hour and it gave me a great sense of confidence to carry on.

Again the road side crew were perfect everything was in place just as ordered, I had asked for sparkling mineral water at the road side stops, as a bit of a change from water. This prompted much ridiculing from Gem and Rick as to whether I required ice and a slice as well! It hit the spot at Wasdale though, I drank loads from the bottle, the heat of the sun was starting to rise and Gem and Rick had given extra water to my support team, I think Anthony was carrying about 4kgs of water plus his own, of which I think he sacrificed some to fit mine in. Gemma rubbed sun cream into my head and my shoulders as it was obvious it was going to be a scorcher. This is where I realised Gem must really love me, she took my shoes and socks off , put talc on my feet and then put new socks on. The minutes passed quickly and it was soon time to get back on my feet and on the way to Honister…………
Posted by Donkarlo at 17:12