Prelude to a BG 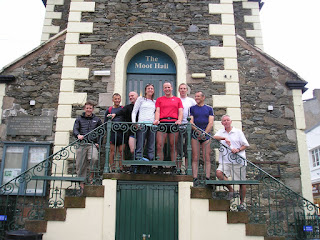 Some of the team prior to the off at the Moot Hall L-R Anthony, Albert, Colin, Gemma, Donkarlo, Rick, Geoff and Jesse 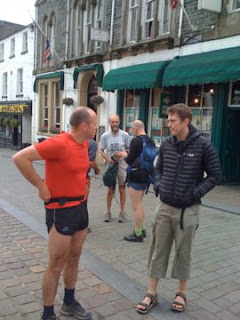 Anthony and me discussing route choices

It has taken me a while but I have got round to writing my report of the fantastic experience I enjoyed over the 26th and 27th June 2009.

Friday was a strange day, I had planned to have a really long sleep, maybe even into the afternoon. This of course didn't go to plan as I was wide awake by 8 and sort of managed to dose until 10 when I decided enough was enough and it was time for a shower. Most of the kit I had sorted through the week , but this didn't alleviate the last minute anguish, envisaging myself sat at Wasdale with no socks, no food and no support. I had a phone call whilst I was in the shower and Gems gave me a shout to say that Duncan Richards was on the phone, I towelled off and spoke to him. Unfortunately due to circumstances beyond his control he couldn't make the Broad Stand support but was in touch with Iain Kelly's rope man to try and sort something out, slight panic ensued, but I just thought, well I have other options if needs be and remained calm. My support crew was complete and without too many last minute changes looked like this.

We had some lunch, lots of spaghetti for me, and started packing the car. The Golf isn't really a small car but it was looking well stuffed with kit and I couldn't help wondering if perhaps we had too much gear, "oh well you can never have too much !". We were slightly late setting off from home and a little behind schedule, but with plenty of time in hand to get to Keswick, Rick rang me to say he was just leaving work so wouldn't be long. We sat outside his house as the minutes ticked by and I was starting to get slightly nervous as half past four approached, leaving us just enough time to get to Keswick for half past six if there was no traffic.

Suddenly a silver streak came flying round the corner as Rick performed a parking manoeuvre at speed outside the house. "Now be careful Aidan, Daddy is a little stressed so stand back" I heard Helen say and we chucked Rick's bags in the car as he hugged Aidan, got changed, kissed Helen and was sat in the car ready to go, all in about 60 seconds ! We them launched into cyberspace as Gemma hit the particle accelerator and we cruised to Keswick at warp speed 8 arriving in plenty of time.

Duncan had called me on the way to say he had spoken to Steve (Iain's rope man) and he would stay put to rope me up Broad Stand, Superstar ! a huge relief. Albert and Colin were already here and looked ready to go, I did the necessary greasing up, checked my kit, explained where everything was in the car and which water was which etc. before wandering onto the High Street to hang around the Moot Hall ready for the 7pm departure. Geoff appeared in the nick of time and we sorted out kit into bags. It was a tense time, lots of people had come to see me off, although all I could think about was the impending run. I don't know if it was nerves but I couldn't really relax and just talk to people, so I'm sorry if I seemed quiet ! 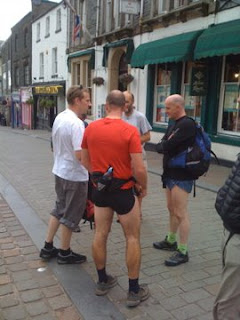 We had a few photos at the door and on the steps that passed a couple of minutes, Rick decided to start running a book on my time, like I needed any more pressure ! A quick kiss and a hug from Gem then as the clock turned seven we were off.......... I don't know quite how exciting this was for spectators as they only see you run about 10 metres before disappearing down a ginnel but thank you so much for coming to see me off. 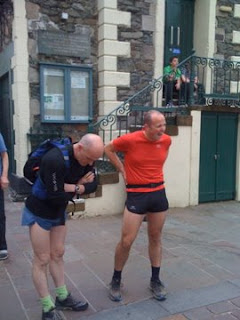 Colin and me waiting for the off
Posted by Donkarlo at 13:39